Remembrance and repentance at former church of the Confederacy 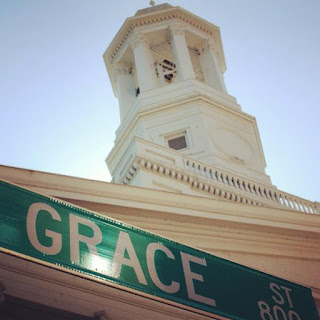 Over the past two years I have been part of a History and Reconciliation Initiative at St Paul’s Episcopal Church. A deep dive into the archives reveals the extent of the congregation’s involvement in Richmond’s slave economy, its promotion of the Lost Cause mythology and racial hierarchy, as well as significant work in recent decades to promote dialogue and to address needs in education and housing.

On Saturday, March 10, we welcomed the presiding bishop of the Episcopal Church, the Most Rev. Michael Curry at a public forum, “Bending toward truth: a forum on race and religion in Richmond.” Curry, who is the first African American primate of the Episcopal Church, came to affirm the work of St Paul’s. Up to 500 people from across the region heard panels of historians, clergy of various denominations, the leader of a foundation focused on health, and the CEO of a museum. As part of the Truth, Racial Healing & Transformation enterprise, Initiatives of Change-Hope in the Cities partnered with St Paul's.

Historians Chris Graham and Elizabeth O’Leary told the forum that the resources that made the church came directly from the profits of factories and businesses built on the backs of enslaved African Americans. One of the benefactors, Joseph Reid Anderson, owned 75 slaves who worked at his Tredegar Iron Works. Graham said that little is known of the people who built the church, “but this story is less about how slavery built the church and more about how the church built race.”

St Paul’s supported a widely-held theology that claimed God ordained racial inequality and that it was the moral duty of whites to govern blacks. “They defined the enslavement of humans not as an act of violence, but as benevolence, which they justified by their Christian faith,” said Graham. People at St Paul’s were “fully invested emotionally, financially, spiritually in the Civil War.” Confederate leaders worshipped in our pews, and after the war the congregation installed an iconography of the Lost Cause and used magnificent stained-glass windows to tell a false narrative of former glory which denied slavery as the primary cause of the war – an early example of fake news. The land for the Lee monument was donated by a member of the congregation. Members of St Paul’s were delegates to the 1902 Virginia Constitutional Convention which disenfranchised huge numbers of African Americans though poll taxes and literacy tests to re-assert white supremacy; this led to 86 years of rule by the Democratic party.

In the first part of the 20th century, the church was eager to improve “race relations” and promoted charitable causes but only within the context of Jim Crow segregation. St Paul’s members were involved on redlining that prevented blacks from purchasing homes in white neighborhoods, and in the decision to construct a highway though the heart of the thriving African American business district.

However, in recent decades St Paul’s has incubated important efforts such as the Micah Initiative which inspired scores of area congregations to support elementary school children and teachers, particularly in high poverty areas, and the Richmond Hill ecumenical retreat center which has become a vital place of spiritual renewal and racial reconciliation. Members of the congregation were also instrumental in the development and support of Hope in the Cities. Indeed, Rev. Ben Campbell, the founder of Richmond Hill, was my closest ally in the early development of Hope in the Cities as it launched its campaign for honest conversation on race, reconciliation and responsibility, including Richmond’s first walk through its racial history.

The forum featured panels of historians and scholars including Edward Ayers, president emeritus at the University of Richmond, Corey Walker, dean of the Samuel DeWitt Proctor School of Theology at Virginia Union University, as well as clergy of different denominations, and Mark Constantine, president and CEO of Richmond Memorial Health Foundation and Christy Coleman, CEO of the American Civil War Museum.

Among the insights I noted: 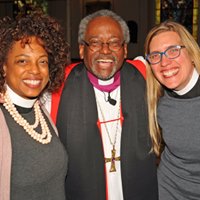 In a call to action, Bishop Curry told the forum, “This is important not only for Richmond but for the nation and the world. We must find a better way; you are modeling a better way.”

A statement printed as the introduction for a service of remembrance and repentance on Sunday summarized the key findings of the historical research. It concluded: “While our church is rooted in great injustice, our story reveals great transformation and courage among our members who we have not remembered as we do our famous war heroes. Taken together this whole story provokes us to think about repentance. To repent is to turn around. We are turning. There is more turning yet to do… We humbly acknowledge that this service of remembrance and repentance is but a step along a journey.”

Curry’s sermon focused on the power of love which is the antitheses of selfishness. He called self-centeredness “the most destructive force in the universe.” He left us with the affirmation that “St Paul’s has the capacity to speak hard words that are saturated with hope.”

Posted by Trustbuilding at 5:05 PM